There were three ‘rules’ to this Saigon street food tour:

- We recommend that you don’t drink too much water as it will fill you up too fast.

- You should pace yourself.

- Know that you don’t have to eat everything given to you.

This is exactly what you want to hear when you take a food tour! These were the three pieces of advice our guides from Back of the Bike Tours in Saigon gave to us before we started out evening street market food tour.

These 3 instructions pretty much set the stage for a Ho Chi Minh City streetfood feast – and the need for elastic waistbands. Duy and Huong picked us up at our hotel on their motorbikes and were full of youthful energy. They were in their low 20’s and they spoke excellent English.

As Evie and them bantered back and forth I realized that this was the first time Evie really got to interact with young adults her age who were local. It was fun to watch them talk about cars, motorbikes, school, living at home, and dating – I love that cultural knowledge gathering that bonds people and starts to make us feel like we are all in this together on the globe. Duy and Huong were upbeat and their energy was appreciated on this rainy night in Saigon.

This night market tour was designed to get you introduced to the sometimes scary and confusing world of Vietnamese street food. We were going to eat where the locals ate – on the street on little plastic chairs. The only way to experience Vietnam!

The tour included 5 street food stops (4 savory and 1 sweet stop) – the first was for banh mi – a Vietnamese meat sandwich. I LOVE banh mi – and I really LOVE the banh mi in Vietnam – as it’s different than what you get in the US. The US makes it a little more American friendly and leaves out the pate, headcheese, and pork belly – but in Saigon you can get the real thing.

Common condiments include spicy chili sauce, sliced chilis, mayonnaise, and cheese. And the bread is lighter than a regular baguette because it’s made with rice flour. Now that’s real banh mi. 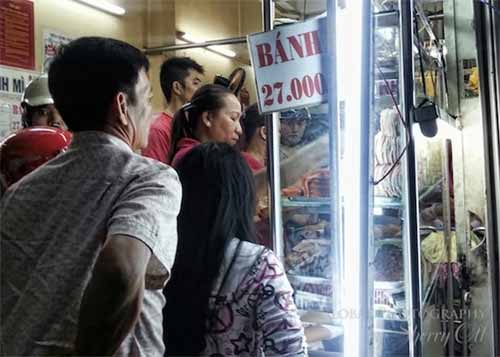 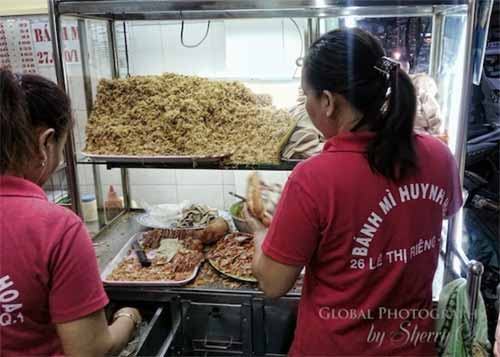 And we weren’t the only ones getting the real thing – there was a huge line at Huynh Hoa on Le Thi Rieng street.

It was a little hole in the wall shop, but the stand was packed with locals pulling up on their bike and getting them to go. A man sweat over a little oven warming up the perfect bread while a few women grabbed meat and veggies with chopsticks, placing it between the warm bread.

After saucing it up they’d wrap it in paper and snap a rubber band around it and off you went. They had two stands in a little store space and only sold take away. Clearly a great local find – Evie and I gave it two thumbs up – the best banh mi we had in Saigon.

The 2nd stop was for the much loved Vietnamese soup – but this wasn’t the traditional pho I was used to – it was crab soup. I am normally not a huge of seafood – mainly because it’s too much work or its not really something I crave.

However, this broth was delicious and as Evie said it tasted like butter! The soup had little fish cakes, and shrimp toast in it including a small crab that you could pretty easily break apart with your hands and suck out the meat. You dipped the meat in a green chili sauce that was spicy and gave Evie the hiccups. Even though it was spicy I took Duy’s advice and tried not to fill up on water!

The 3rd stop is where we had our share of greens and some of my favorite Vietnamese wrapping food. It was a simple Vietnamese pancake street vendor and grill – yum. They even let Evie do a little street cooking.

Duy and Huong showed us how to take the Vietnamese pancake and add various greens to it, wrap it up in rice paper and eat it like a little burrito. But first they made us taste each of the green leaves/herbs on their own – some were quite pungent. But rolled together in this fresh tasting burrito and then dipped in fish sauce – it went together perfectly.

All the flavors balanced out perfectly. Next we had grilled beef wrapped in lot leaf as well as a beef sausage grilled up. We were instructed to wrap it the same way with greens and eat with an anchovy sauce which was surprisingly delicious. This rice paper wrap and fresh greens is how much of the food is eaten in Vietnam – and strangely you seldom see this in Vietnamese restaurants in America. That’s why you need to go and have the real thing…from the street! 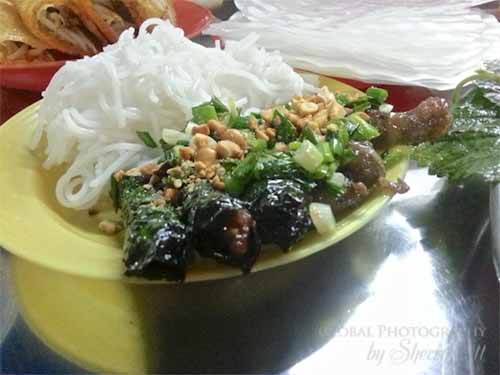 Grilled meat in lot leaf with rice noodle. Next step – roll it up in a burrito! 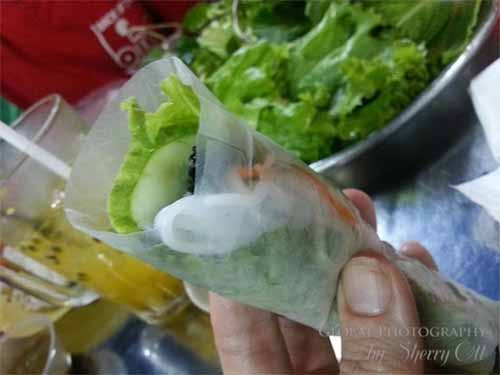 Wrapped up and ready to eat!

They also ordered us a variety of fresh juices – sugar cane juice with kumkwat and fresh pasionfruit juice to wash down all the food. The elastic waistband was becoming a necessity.

Wash it All Down With A Few Drinks

The 4th stop was for bun cha – grilled pork, noodles, and greens with a little broth over the top. It was served with Vietnam fries – a shrimp and sweet potato mixtures fried up in a light batter. And then they brought us something I had never tried yet it was so good it made me want to move back to Vietnam just so I could have it every day – corn milk. It’s exactly what the name says – fresh corn flavored milk.

Evie and I were a bit skeptical as they poured it over ice but we tried it and both squealed I delight. Delicious! This then led to a whole conversation about Nebraska (where Evie lives) being the Cornhusker state. They seemed quite amused as we tried to explain the purpose of college mascots to them. 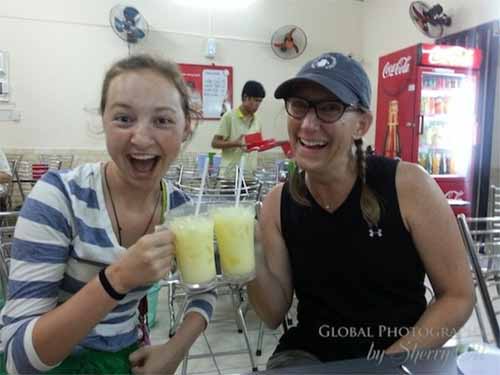 Evie and I enjoying our corn milk. Cornhuskers at heart!

Just when I didn’t think I could eat another bite and get back on the motorbike, we made the final stop for dessert. However it wasn’t just a dessert, it was 5 desserts. They included rau cao (coconut jelly and custard made with agar agar), a soursop shake, pumpkin and custard in cows milk and ice (served like a soup), a durian shake, and finally fresh young soy with milk and chocolate. Yes – we tried it all. Yes – we were stuffed. 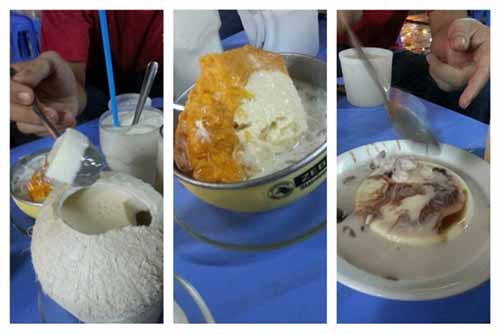 Duy was a smart man when he said don’t fill up on water! The guides really made this 4 hour tour a winner – but the food was plentiful and delicious. I tried a number of new things myself. And I was thrilled that each place was extremely local – we never saw another tourist at any of them.

I would recommend this experience to anyone visiting Saigon – and especially to people who really want to get into the food scene. But do this first when you arrive and then you have all kinds of chances to continue to eat this tasty food from the streets now since you’ll know what some of it is.

There’s no need to be intimidated by the street food in Saigon if you have a little help! 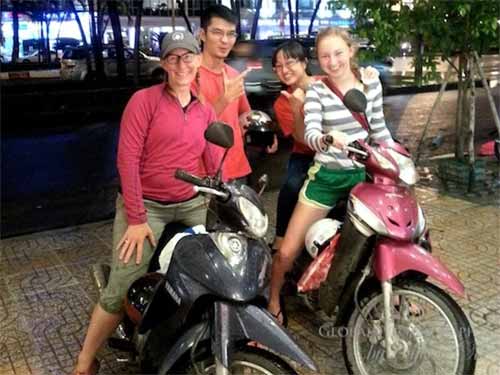 Evie, Huong, Duy, and me on our motorbikes

The original post by Sherry Ott can be found at her own blog here.